More Power to the Pedal! 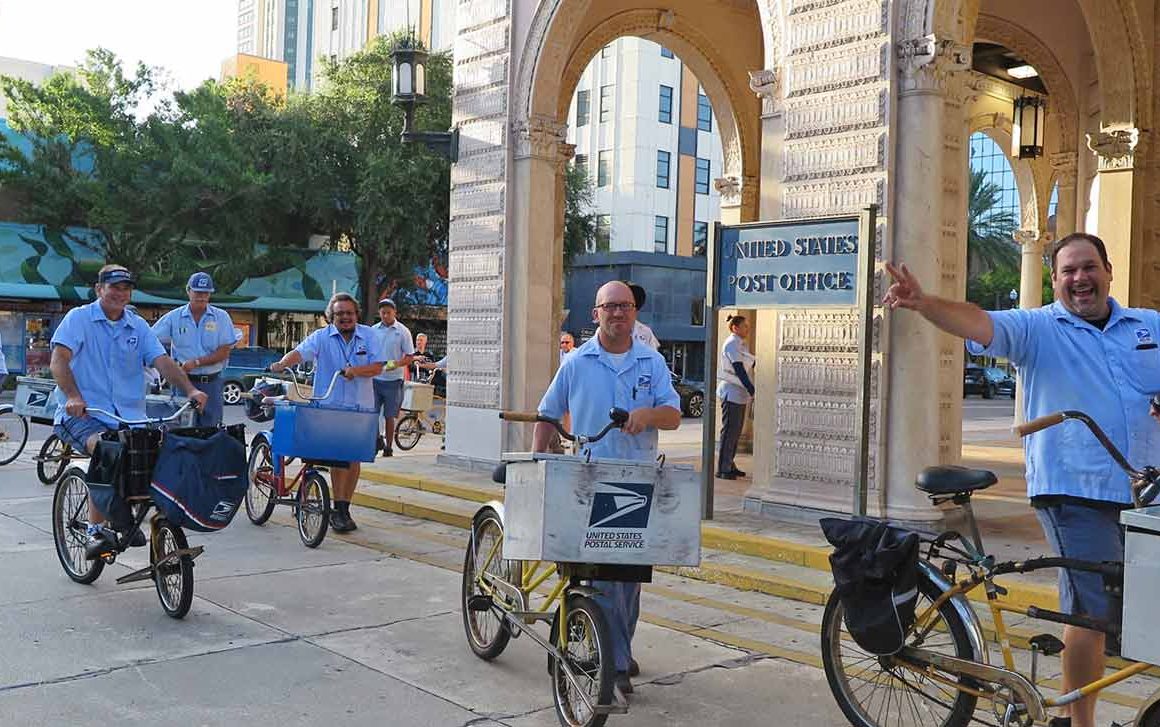 Neither snow nor rain nor heat nor gloom of night stays these couriers from the swift completion of their appointed rounds. – USPS Motto

Among the many unique features of the Old Northeast, one of the longest continuous traditions is bicycle mail delivery. St. Petersburg is one of three remaining cities in the country where the United States Postal Service still delivers mail by bicycle. 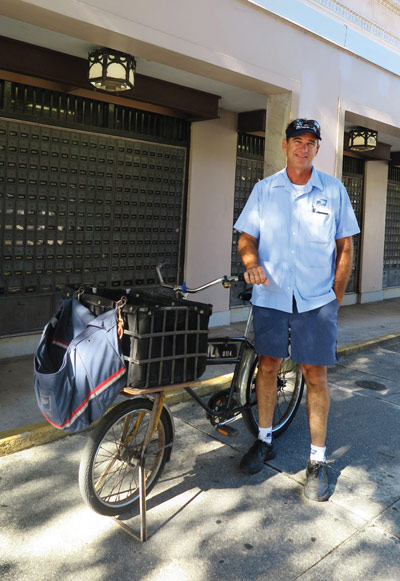 Chris Hubble is a 23-year veteran of the bicycle fleet.

Built in 1917, the Open Air Post Office at 76 4th St. N was the product of a joint effort among three prominent figures in St. Petersburg. Modeled after Edwin H. Tomlinson’s earlier post office on Central Avenue, the open-air concept was designed to provide postal customers with 24-hour access to their mailboxes. While there was some scrutiny and skepticism about the novel design, supporters insisted that it was perfect for the St. Petersburg climate. Postmaster Roy Hanna lobbied for and secured $107,500 from Congress for the new building. Architect George W. Stuart drew the plans and the new Mediterranean Revival structure was born. On April 4, 1975, it was added to the U.S. National Register of Historic Places.

With the first automobile in St. Pete arriving in 1905, bicycle mail delivery remained the norm. The fleet of cyclists were not only deliverers, they also participated in local parades, had their own bowling and bicycle teams, and all on their own time. It was a very tight-knit community. 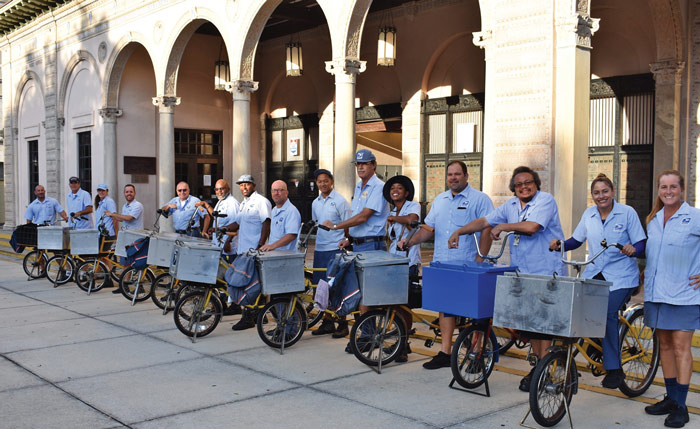 The bicycle fleet ready for the day’s action.

The Open Air Post Office celebrated their Centennial Anniversary in September 2017, and now supports a total of 18 postal routes in the 33701 Old Northeast zip code, including a newly created bicycle route. The region is bounded North-South between 14th Ave NE and 17th Ave S, East-West from the Bay to Martin Luther King Street. There are 13 bike routes with three to four relay boxes along the way, and five motorized routes primarily delivering parcels weighing over two pounds. In total, the carriers make over 13,000 deliveries each day. 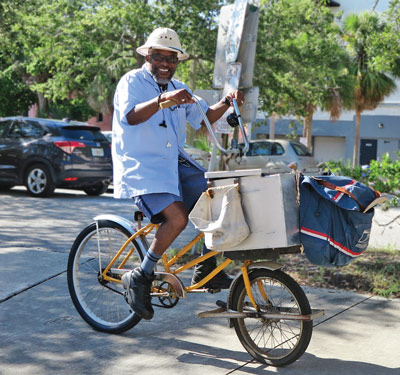 Chris Hubble is a 23-year veteran of the fleet and executive vice president of the Branch 1477 of the National Association of Letter Carriers. He’s always been an avid cyclist and rides with the St. Pete Bike Club. He began his Postal Service career in Hyde Park in Tampa, but one day as he was riding down 4th Street, he saw someone sitting by a relay box with her bike. He recalls asking her if she was a letter carrier, and being surprised by her unenthusiastic, but affirmative response. He asked, “So you get mail and deliver it on a bike??” Chris says he loved the idea. He explains, “I applied for a transfer and did a mutual swap to St. Pete. I just wanted to get my foot in the door, thinking, ‘I gotta get this!’” And get it, he did. He started out with Route 12, and explains, “The rest is history.”

The much sought-after bike routes are assigned based on seniority. Says Hubble, “We have a couple of carriers who had 26 years of seniority when they applied for the bike routes, and they said that they would have come here earlier had they known.” He cautions that this profession is not for everyone, however. “Delivering mail is a career of hard work. As for the unique opportunity of delivering mail by bicycle, either you love it or you don’t.” 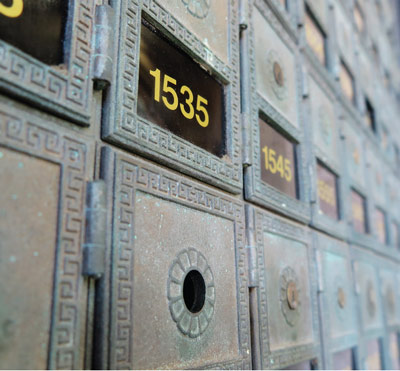 Hubble is one who loves his job. “There is never a dull moment. I get to ride a bike in beautiful downtown St. Petersburg, all while delivering the mail. It’s a great stress reliever. With the environment that we work in – it’s very physical and mental, but on the bike, you have a sense of freedom. You get paid to ride a bike for six hours.” Operations at the office begin as early as 4:30 a.m. That’s when– as Tracie Finley, USPS customer relations coordinator, describes it – “the magic happens.” Each deliverer is responsible for sorting his or her own mail. When complete, they load up their bikes with about 1.5 hours’ worth, and then the riding begins.

The single-speed cruisers are personalized by their owners, but are still distinctive in their own right. Weighing in at nearly 50 pounds, the bike has a 20” front tire which is smaller than the rear. The unique center kickstand is located on the fork so that it can support a load up to 75 more pounds in the basket above, i.e. the mail. And while the wheel turns, the basket does not. Hubble always advises his new trainees, “Do not look at the basket when you’re turning.” 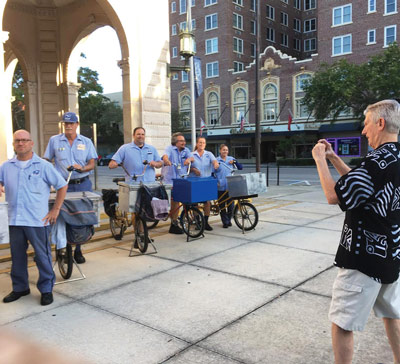 Robert Holmes taking a picture of the fleet for his next painting.

Chris has claim to the oldest bike of the group. “I found it in the basement of the building. I apprehended it, rebuilt it to the way it was, and just changed the route number.” A few years back, the team got together and designed a lighter aluminum cargo box, but he held onto the only canvas cage basket, a remnant of the 1960s.

There are many advantages to bicycle delivery. City and government employees are permitted to use the sidewalks, but parking can be difficult downtown. Studies have also shown that more mail is delivered by bicycle than with a motorized vehicle. In one year, they also save thousands of gallons of fuel and save money on the maintenance of 13 vehicles, leaving a smaller carbon footprint. “Back in the ’70s with the gas shortage, there were also more bike routes,” says Hubble. He points out that the Euclid Station still has one bike route in operation after losing a vehicle.

Hubble explains, “You park at your first delivery, walk down the street. Then go to the next relay. It’s amazing. They see this bike, and they know it’s a U.S. postal bike.” Tracie adds, “The kickstands are a dead giveaway.” Flat tires have not been an issue either, nor have there been any accidents. The post office even has its own mechanic for regular maintenance on the bikes.

Even under the blazing sun and stifling humidity of summer, Chris says that “with a nice little breeze, parked under a shade tree, it can still be cooler than some of the long-life vehicles.” The letter carriers still walk more than ride, pedaling approximately six miles and logging over 20,000 steps a day. The notorious thunderstorms provide an additional challenge in the summers, but Hubble has fun with them. “We get some side pours, and you have to dodge the rain drops. But what’s really neat about the Old Northeast is that there are a lot of porches.” He pauses, “When it rains, it’s almost like a competition to keep the mail dry. I feel like a little kid again! It slows you down for sure, but you seek shelter, and you’re going to get the job done.”

This job, however, is not without other hazards. On foot, the satchel is used to carry the mail when going from house to house, but Hubble explains, “It is also the number one defense against dogs, if necessary. It is the first thing that can come between a dog and the carrier.” Hubble has only been bitten twice. “But we actually train the dogs. We come into their yard. They bark, and we leave. So we really train them to dislike us.” The carriers are aware of customers who are dog owners. They multi-task walking along their route, flipping through the mail, getting ready to make the delivery, and working with a sense of urgency, so it is easy for a carrier to be surprised by a neighborhood canine.

Carriers take a lot of ownership of and pride in their routes. Finley notes that they always refer to, “My customers. My route.” She adds, “If they notice that mail is piling up in the mail boxes, they will suspect that something might be up inside.” She recounts stories where postal deliverers have helped their customers during medical emergencies or even fires. 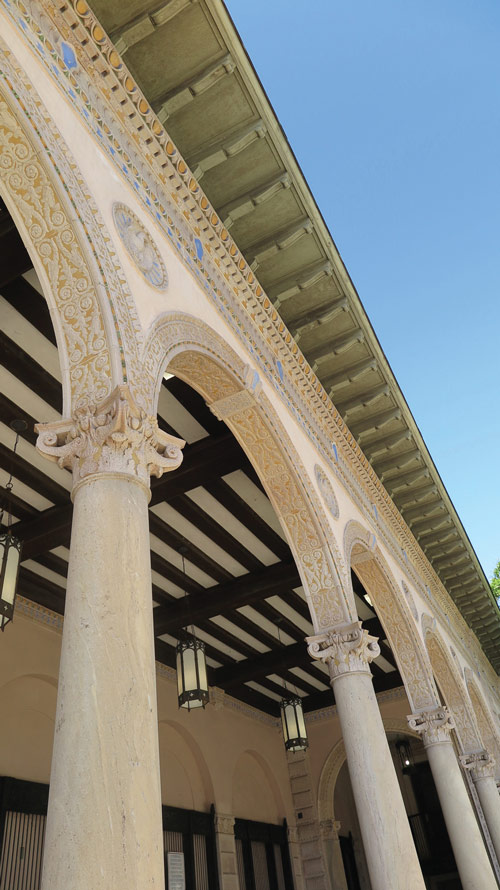 The Open Air Post Office is an architectural gem.

The atmosphere behind the scenes in the Open Air Post Office is a cheerful one. The camaraderie is obvious. Chris says there is an esprit de corps among the carriers – that they feel part of a team. But they are also part of a larger team. Our letter carriers are a quiet but integral part of our communities. They visit us every day and know us by name more than they know us by address. They know our patterns as well as we know theirs. They do more than just deliver our mail. They are our neighbors and our friends.

Chris Hubble has worked his way to Route 14, what he refers to as his retirement route. “I will definitely be riding off into the sunset with my bike,” he says. But for now, as he finishes sorting his mail and is asked if he wants to get out there and ride, he responds with a smile, “You bet. I can’t wait!”

Note: A special thanks to artist Robert Holmes who suggested the topic for this article. He will be painting the bicycle fleet in the coming months.