Started Painting at 83 and Writing at 87

Joan Collins doesn’t look 87 – 72 seems more likely – but she does look like an artist. Today, she wears brown leather sandals, slate-blue Capri pants, and a periwinkle short-sleeved shirt that matches the hue of her lipstick and of her glass necklace. Compact spectacles frame her bright eyes, and her hair, a yin yang of white and gray, is worn short and stands a bit more than five feet above the ground.

Collins appears to have followed the artist’s way for much of her life. Yet she took it up only four years ago.… Read More

Hey mister, where can you find waves around here?” That’s the question I hear nearly every time I’m loading or unloading my standup paddleboard (or SUP for short) at one of our local beaches. I explain that you don’t need waves; you stand on top of the board and paddle it. Then the questions come in a fury: “Is it hard? Do you need to have great balance? Aren’t you afraid of sharks?” I smile and answer all the question that come my way. No it’s not that hard; you don’t need great balance, especially on the calm water in the bay; and I’m not afraid of sharks, because if you’re going in the water… there are going to be sharks.… Read More 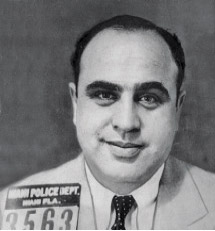 Over the years, there have been numerous rumors, reports, and stories about Al Capone in St. Petersburg. This article is an exploration and new look at those stories.

“Al Capone Pays Vist to the City” reads the caption on the front page of the St. Petersburg Times on February 10, 1931. The article reported, “Al ‘Scarface’ Capone, reputed king of Chicago’s gangland, paid a visit to Pinellas County Monday, spending a few hours in St. Petersburg and later motoring to Tarpon Springs, where he spent considerable time looking over the sponge industry. Capone, with a party of five, including one woman, was seen here by several persons.… Read More

What started as a chance meeting, turned into the story of a flag, a judge, and his affection for his fallen brother. For me, it became a promising friendship.

Memorial Day morning, I was awakened by a phone call from my mother asking me to meet her to help a neighbor put up a flag. Happy to oblige, I raced over. Upon arriving, I saw an old 48-star flag draped over a tree, and I met Judge David O’Neil. The judge is a tall soft-spoken man. He walks with a cane and gives a firm handshake.

He told us that the flag was presented to his parents after the death of his brother Charles, who served in WWII.… Read More

In May, one of our own Old NE Neighborhood residents, Jackson Willis, graduated from Shorecrest Preparatory School as the 2015 Class Valedictorian. In addition, he was also selected as a U.S. Presidential Scholar, one of only 144 students to be named as such in 2015. He was selected based on his academic success, essays, school evaluations, transcripts, community service, leadership, and demonstrated commitment to ethical and moral character.

Jackson Willis is the fifth generation to live in his home in Old Northeast St. Petersburg. His great-great-grandfather, Benjamin Latham Loyd Armstrong from Connecticut, built this home with a basement in the Old Northeast in the 1920s.… Read More